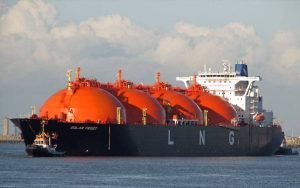 19 September 2018, Sweetcrude, Accra — Ghana’s first liquefied natural gas, LNG, import facility in Tema is estimated to cost over $350 million, of which $200 million would be spent directly in Ghana over the next 18 months.

According to a statement by the Ghanaian government, two Chinese companies have been selected to handle the construction of the facility.

The construction of the LNG terminal comes on the heels of a 12-year LNG supply agreement that was signed by the Ghana National Petroleum Corporation, GNPC, and Russia’s Rosneft, the statement said.

The facility would be able to supply about 30 percent of Ghana’s total electricity generating capacity, displacing crude oil and crude derivatives as fuel sources for the generation of power, it said.

The construction of the LNG terminal is expected to be completed in 18 months.