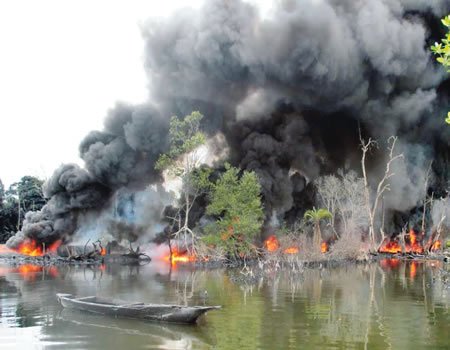 Port Harcourt — An explosion suspected to have been caused by activities of illegal oil refiners, has razed two houses in Ozuoba community, Obio/Akpor Local Government Area of Rivers State.

Confirming the development, the Rivers State Police Command said the fire occurred on Thursday evening, inside a compound used in the refining stolen petroleum by illegal oil bunkerers.

Police Public Relations Officer in Rivers State, DSP Nnamdi Omoni, said Police operatives who mobilized to the incident scene were able to put out the fire.

According to him, “I can confirm that there was an explosion. Our preliminary investigation reveals that a compound used in refining illegal product was affected by the explosion.

“Our men mobilized to the place and thwy were able to put out the fire and restored some level of normalcy.”