Port Harcourt — The Nigerian Content Development and Monitoring Board has begun distribution of relief materials to flood victims in different Local Government Areas of Bayelsa State. 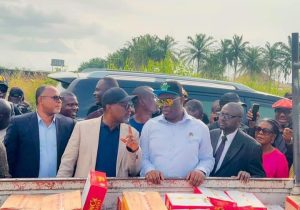 *The Minister of State for Petroleum Resources, Chief Timipre Sylva and the Executive Secretary of NCDMB, Engr. Simbi Kesiye Wabote, at an IDP camp in Yenagoa, Bayelsa State

Delivering the Palliatives to the paramount rulers and leaders of the various communities, the Executive Secretary of NCDMB, Engr Simbi Wabote, said Board came up with program as its way of supporting and empathize with them over the flood that has ravaged their communities leading to many devastating loses.

The Palliatives were distributed to Akenfa, Polaku, Tombia and Amarata communities in Yenagoa LGA, where the leaders and citizens thanked the Board and the Executive Secretary for assisting them in their time of need. 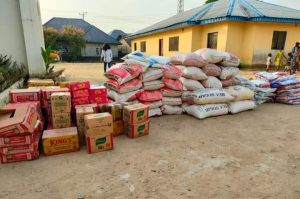 *Some of the materials

“We shall visit communities in another Local Government area tomorrow as we continue the tour,” Kikile said.

The visit by the Minister was to conduct an on-the-stop assessments of the level of devastation caused by the flood, reach out to the temporarily displaced people; to empathize with them and encourage them to be hopeful and optimistic about post-flood life.

Sylva who is also the Chairman of the Governing Council of the NCDMB also led the Board to distribute food items to the IDP Camps to ameliorate the hardship caused by the flood.