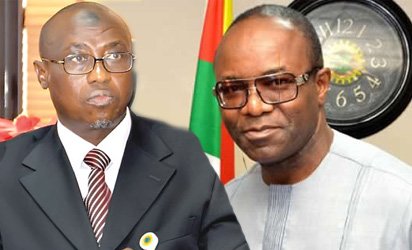 Oscarline Onwuemenyi
11 October 2017, Sweetcrude, Abuja – The Group Managing Director of the Nigerian National Petroleum Corporation, Dr. Maikanti Baru, has again reacted to allegations of corruption and insubordination raised against him by the Minister of State for Petroleum, Dr. Emmanuel Ibe Kachikwu.

In his second response in two days, Mr. Baru said he did no wrong and repeated his argument that the NNPC board chaired by Mr. Kachikwu had no powers to regulate or approve contracts awarded by the state oil company.

Baru, who spoke when major unions in the oil and gas sector, PENGASSAN and NUPENG, paid the embattled Group Managing Director a solidarity visit, accused Mr. Kachikwu of bandying “humongous” contract figures to incite the public, and described the allegations of award of contracts without regard to due process as “unfounded and unfortunate”.

Dr. Baru said as a former chairman of the NNPC Anti-Corruption Committee, he would be the last person to breach the procurement process by disregarding extant laws and rules.

He said both the NNPC Act and Public Procurement Act vested procurement powers on the NNPC Tenders Board, the President and the Federal Executive Council (FEC) depending on the cost threshold, stressing that the NNPC Board had no role whatsoever in the process.

“I know for those of you who are following what we are doing here, you know that there’s no money lost and no process has been breached,” he told the visiting union leaders according to a statement issued by Ndu Ughamadu, NNPC Group General Manager Group Public Affairs Division.

He said the crude term contract and the DSDP agreements were not contract as such but pre-qualification of off-takers of crude oil.

“The case of DSDP, is of those that will take crude and give us products in return. So there is no value to them. But humongous figures have been put forward mainly to incite the public, it is most unfortunate.”