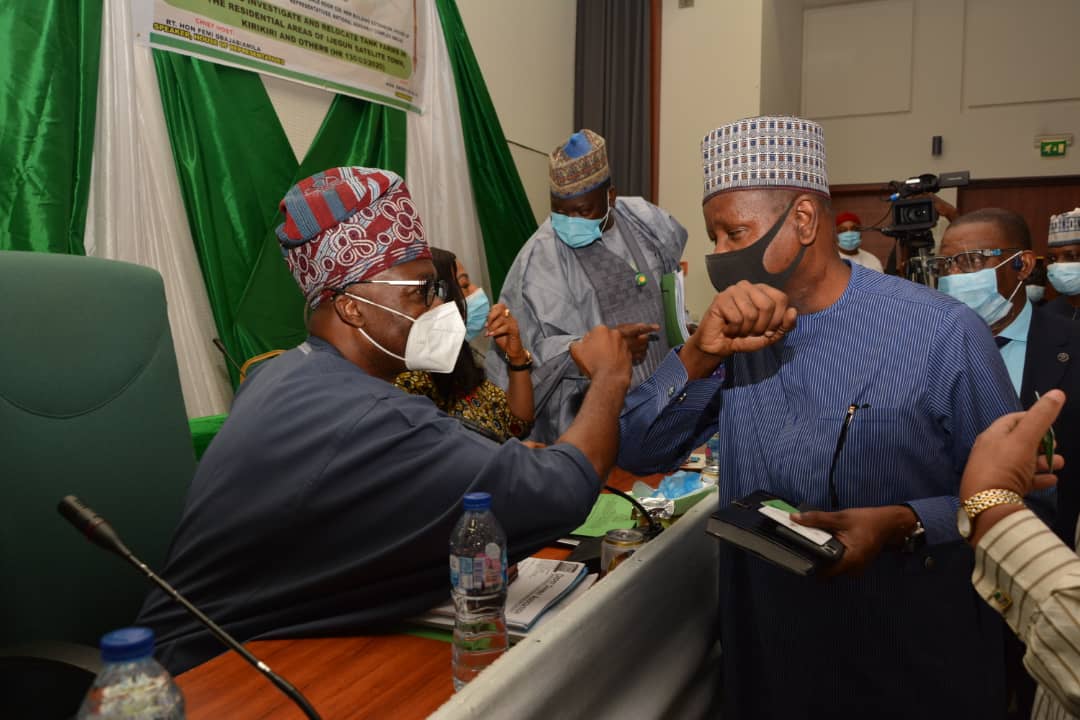 *Representative of NNPC GMD and NNPC Chief Financial Officer, Mr. Umar Ajiya, exchanging pleasantries with the chairman of the House of Representatives Ad-hoc Committee on Relocation of Tank Farms and Depot from Residential Areas, Hon. Sergius Ogun (left) after the hearing at the National Assembly, Abuja… Wednesday.

Abuja — The Nigerian National Petroleum Corporation (NNPC) has advised against a swift relocation of tank farms from their current locations along Ijegun, Kirikiri areas in Lagos and other parts of the country in order to avoid a dislocation in the supply and distribution chain of petroleum products across the country.

The corporation made the submission Wednesday at a hearing by the House of Representatives’ Ad-hoc Committee on Relocation of Tank Farms in Residential Areas of Ijegun, Kirikiri.

A press release by the NNPC Group General Manager, Group Public Affairs Division, Dr. Kennie Obateru, quoted the Managing Director of the Corporation, Mallam Mele Kyari, as saying that NNPC was not averse to the relocation of the petroleum products tank farms and depots sited in residential areas but would rather that some time be allowed to achieve the full rehabilitation of the refineries and the completion of the Dangote Refinery to enable the nation exit fuel importation before their relocation.

The GMD who was represented by the corporation’s Chief Financial Officer, Mr. Umar Ajiya, told the committee that the tank farms and depots were a major artery for receiving and distributing imported petroleum products to all parts of the country and that their abrupt relocation would could trigger a crisis not only in the Downstream Sector but also in the nation’s economy in general.
“We are not opposed to the yearnings of the communities or the relocation of the tank farms and depots, but we want it to be done in phases because of the huge financial commitments by the stakeholders. If they are relocated abruptly, even the banking sector would be affected because of the loans they granted for the establishment of the depots”, the GMD stated.
Speaking earlier while inaugurating the Committee, the Speaker of the House of Representatives, Hon. Femi Gbajiabiamila, said the Ad-hoc Committee was set up to investigate the concerns expressed by the residents in order to have a fair assessment of the situation.
Hon. Gbajiabiamila who was represented by the House Deputy Minority Leader, Hon. Tobi Okechukwu, acknowledged that tank farms and depots were a critical component of the Downstream Petroleum Sector and assured that the House would look at the issue wholistically and make a decision in the public interest.
He decried the inability of the NNPC to distribute petroleum products through the pipelines due to incessant vandalism which has made products distribution by tankers over long distances a hazard to the society.
The committee was set up sequel to petitions by the residents of Ijegun, Kirikiri and others areas in Lagos State on the dangers posed by the operations of depots and tank farms to their respective communities.
The Committee is chaired by Hon. Sergius Ogun.