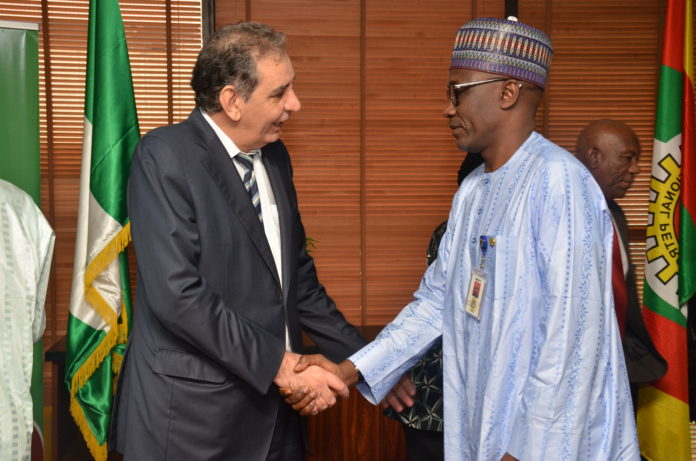 Lagos — The Nigerian National Petroleum Corporation, NNPC, and the Kingdom of Morocco have pledged to deliver on the gas pipeline bilateral agreement between Nigeria and the North African nation in record time.

This was made known by the Group Managing Director of the Corporation, Mallam Mele K. Kyari, while receiving the Moroccan Ambassador to Nigeria, His Excellency Moha Ou Ali Tagma, at the NNPC Towers, Tuesday.

It would be recalled that during separate state visits, Morocco’s King Mohammed VI had on December 2016 visited Nigeria while on June 2018, President Muhammadu Buhari reciprocated the gesture, which saw both leaders signing a number of Memoranda of Understanding, MoUs.

The agreements include a Pipeline Cooperation Agreement, PCA for the Nigeria-Morocco Gas Pipeline; an MoU to develop a chemical plant in Nigeria for production of ammonia and its derivatives and thirdly, an agricultural cooperation agreement on vocational training and technical supervision.

The PCA will particularly facilitate the establishment of a gas pipeline to supply feedstock gas from Nigeria to Morocco, across the West African sub-region and all the way to Europe.

Speaking on the development, Kyari told the visiting Ambassador that the NNPC was fully aligned with the terms of the MoU and committed to delivering them on time for the benefit of their respective citizens.

“We are completely aligned with the MoU signed by our two governments. We will take it forward and ensure that those terms that are particularly related to oil and gas industry are delivered in record time,” Kyari stated.

The GMD told the Moroccan envoy that key among the crux of President Muhammadu Buhari’s foreign relations was to widen cooperation among African states and expand the economic corridors of the continent.

“This is very important towards job creation, economic prosperity and ultimately, the achievement of overall peace and stability across the entire African continent,” Kyari added.

Kyari, who described Nigeria’s historical relationship with Morocco as dating back to a thousand years, said the two countries would continue to work together to further harness the huge gas resources abundant in Nigeria.

“Unknown to many people, Nigeria is more of a gas province than oil. We have billions of untapped gas resources. I am optimistic that our bilateral cooperation around the gas pipeline with Morocco will boost the economies of all countries across the West African states and up to Morocco,” the GMD stated.

Earlier in his remarks, Ambassador Tagma congratulated the GMD on his recent appointment and wished him success during his tenure.

He described Morocco and Nigeria as “two important African countries” that can achieve a lot while working together towards developing their respective economies and creating jobs for their citizens.

On the other hand, the Corporation has indicated interest in working with the Indonesian national oil company, Pertamina, to improve on the volume of crude oil export.

According to Kyari, the partnership with Pertamina could open up more opportunities for the nation’s crude oil and gas in the face of the unpredictable global market.

Mele Kyari said that NNPC was ready to renew the trade contract with the Republic of Indonesia which expired last year and directed the relevant arms of the corporation to work out modalities to ensure a better deal for the benefit of both countries.

Earlier in his presentation, the Indonesian Ambassador, His Excellency, Dr. Usra Hendra Harahap, noted that Indonesia has a long history of mutual relationship with Nigeria and was ready to improve on its $2.5 billion trade balance with Nigeria.

“Last year alone, Indonesia imported from Nigeria crude oil worth about $2.5 billion; but that contract ended in December 2018”, adding that crude oil from Nigeria was considered to be of very high quality and environmentally friendly.

The Ambassador expressed confidence in the capacity of the NNPC new GMD to deliver on his mandate as the leader of the oil and gas industry in Nigeria.

“The new NNPC boss is very experienced. I read his curriculum vitae and I found it very wonderful. Nobody can cheat him because he grew through the ranks to the top. I think NNPC will be very strong by his leadership qualities”, the diplomat concluded.

The NNPC and the Budget Office of the Federation have commenced extensive round-robin stakeholder engagement designed to seek effective coordination of the 2020-2022 medium-term fiscal frameworks.

The meeting which teed-off at the NNPC Towers on Tuesday had in attendance the Group Managing Director of the Corporation, Mallam Mele Kyari, and his Top Management team in parley with the Budget Office of the Federation led by the Director-General, Mr. Ben Akabueze, and his team.

Mallam Kyari said the parley marked the beginning of extensive collaboration with the budget office to harmonize strategies geared towards ensuring optimization of resources aimed at improving the corporation’s revenue generation ability.

The NNPC GMD said as the main enabler of the Nigerian economy, the NNPC would work with the Budget Office to further transparency and enhance prevailing sanity in the reporting of oil and gas revenue remittances to the Federation Account.

He said as the entity entrusted with the mandate of superintending over the nation’s vast hydrocarbon resources on behalf of the government and people of Nigeria, the NNPC must be open and accountable to all stakeholders.

Earlier in his address, Mr. Akabueze said it was important to meet with the NNPC Management at the top level to drill down on all issues and possible fiscal scenarios ahead of the 2020-2023 budgetary frameworks.

He said the budget office was looking up to fruitful deliberations with the NNPC strategy team in the weeks and months ahead to smoothen the process of achieving a win-win fiscal regime.

Akabueze noted that despite the push to diversify the nation’s revenue base, the oil and gas sector remains the main earner of foreign exchange in Nigeria.