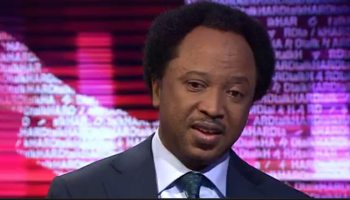 06 October 2017, Sweetcrude, Abuja — The Senator representing Kaduna Central, Shehu Sani has asked President Muhammadu Buhari to remove himself as Minister of Petroleum Resources, noting that the President’s inability to give 100 percent attention to the sector has exposed it to irregularities.

In a statement signed by the Senator and made available to reporters in Abuja, he said the President should appoint a successor who would oversee the affairs of the ministry.

Recall that President Buhari had named himself substantive Minister of Petroleum after his election in 2015.

His Minister of State for Petroleum Resources, Dr. Emmanuel Ibe Kachikwu, had recently written a petition to the President, stating that things are not going well in the Nigerian National Petroleum Corporation (NNPC).

According to Sen. Shehu, with so much on his desk as President, Buhari has limited time to oversee the oil industry.

He said, “President Buhari should disengage from being a Petroleum Minister and appoint a substantive minister whom the nation can hold accountable to the happenings in the nation’s oil industry.

“The President’s position as a minister can drag him into issues in the oil sector of which he has limited time to attend to.

“A broom immersed in oil cannot sweep clean,” he added.

Meanwhile, Senator Lee Maeba, from Rivers State, has berated the Minister of State for Petroleum, Emmanuel Ibe Kachikwu, over his allegations against the Group Managing Director of NNPC, Dr. Maikanti Baru.

In his reaction, Maeba faulted the decision of the Minister to petition the president.

Maeba described the Minister’s action as an act of extreme behaviour. The lawmaker said Kachikwu should have explored all measures available before writing a letter.

He said, “I believe the behaviour of Kachikwu is to the extreme. He should have shown maturity, he could have as well issued a query to the GMD before finally using the option of writing the President.

“I strongly believe a minister should not have acted the way he did.”