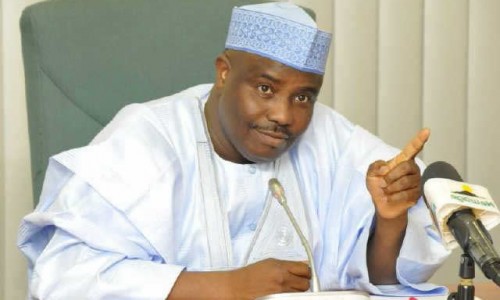 Oscarline Onwuemenyi
10 October 2017, Sweetcrude, Abuja – President Muhammadu Buhari on Monday met separately with three state governors from the Northern part of the country on issues bothering on the possible oil exploration in the North as well as security among others.

The governors who met with the President at the Presidential Villa, Abuja, include Ibrahim Geidam of Yobe State; Aminu Tambuwal of Sokoto State and Abubakar Badaru of Jigawa State.

Tambuwal told correspondents after the meeting that he briefed Buhari on possible oil exploration in the Sokoto Basin.

He said there was the need for the Federal Government to continue to support the endeavour which would help in the provision of more oil and gas for the country and bringing about agricultural revolution in that area.

The governor said the oil had always been in the basin since 1957 when the first attempt was made.

Last year, President Muhammadu Buhari directed the management of the Nigerian National Petroleum Corporation (NNPC) to fast-track oil exploration in the North, specifically in the Chad Basin and Kolmani River.

The President’s directive to the corporation to speed up its oil exploration efforts in the region followed the reported discovery of hydrocarbons by Shell in the Chad Basin and Kolmani River.

The NNPC Group Managing Director, Dr. Maikanti Baru, has explained that the order was with a view to making the most of the reported hydrocarbon deposits in the region.

The NNPC boss noted that the directive had been heeded, as the corporation’s Frontier Exploration Services had retooled to commence exploration with the Northern Nigeria Development Company (NNDC).

The NNDC, Baru said, had already started prospecting for oil in the basin.

He said, “Very close home, we have exploration activities on the frontier basin, that is in the Chad; and also there are some areas close to the Kolmani River where Shell had made indicative discovery of hydrocarbons and Mr. President has directed me to go into that area to reprove and further explore the magnitude and prospects of those finds.

“We are taking steps to get into those regions. We will reinvigorate the Frontier Exploration and see how they collaborate with the NNDC that is holding Block 809 where some of the finds have been found. We will also do the same at the DPR for the other blocks that have not been assigned, and work towards proving the prospects of that region.”