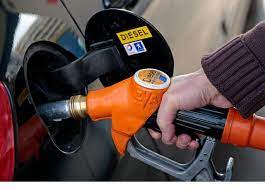 *A customer fills-up his car with diesel at a gas station in Nice. REUTERS/Eric Gaillard

London — Oil prices fell by around $5 a barrel on Monday as investors pinned hopes on diplomatic efforts by Ukraine and Russia to end their conflict, while a surge in COVID-19 cases in China spooked the markets.

Both contracts have surged since Russia’s Feb. 24 invasion of Ukraine and are up roughly 40% for the year to date.

Ukrainian and Russian negotiators are set to talk again on Monday via video link. Negotiators had given their most upbeat assessments after weekend negotiations, suggesting there could be positive results within days. read more

“Beside new talks between Ukraine and Russia, I guess new lockdowns in China are the reason for a negative start of the week for crude oil,” said UBS analyst Giovanni Staunovo.

China, the world’s largest crude oil importer and second largest consumer after the United States, is seeing a surge in COVID-19 cases, as the highly transmissible Omicron variant spreads to more cities, triggering outbreaks from Shanghai to Shenzhen.

“This week, market participants are closely tracking how Russian oil exports are evolving. So far this month oil flows had not been disrupted,” Staunovo added.

India is also considering taking up a Russian offer to buy its crude oil and other commodities at discounted prices with payment via a rupee-rouble transaction, two Indian officials said.

The United States has announced a ban on Russian oil imports and Britain said it would phase them out by the end of the year. Russia is the world’s top exporter of crude and oil products combined, shipping around 7 million bpd or 7% of global supplies.

British Prime Minister Boris Johnson is trying to persuade Saudi Arabia to increase its oil output, a senior minister said, following reports that Johnson would travel to the OPEC heavyweight this week.

“Oil prices might continue moderating this week as investors have been digesting the impact of sanctions on Russia, along with parties showing signs of negotiation towards (a) ceasefire,” said Tina Teng, an analyst at CMC Markets.

Oil prices also came under pressure after India said it will take “appropriate” steps to calm the rise in oil prices, indicating the country could release more oil from its national stocks if required.

Investors are also closely watching the U.S. Federal Reserve meeting this week. The Fed is expected to start raising interest rates, which would boost the dollar and put downward pressure on oil prices.