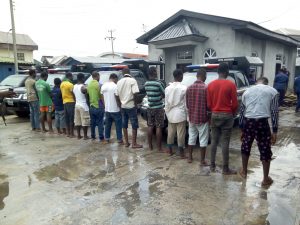 The NSCDC disclosed that this month alone, two suspects have been convicted and sentenced to four years jail term.

The Rivers State Commandant of NSCDC, Mr. Mohammed Haruna, said the aim of the conviction was not to destroy the convicts but for their convictions to serve as deterrent to others.

Haruna explained that the two convicts were arrested by the Corps operatives for dealing with illegally refined automated gas oil, AGO, otherwise known as diesel.

He warned residents in the state to stay clear of petroleum pipelines and assured of the Corps’ resolve to safeguard the nation’s critical assets, especially during the Christmas season.

According to him, “Following the quest to curb illegal dealings in petroleum products and pipeline vandalism in Rivers State, the Corps on 12th December, 2017 secured another conviction against two defendants, Nasiru Abubakar and Abdullahi Isah.

“They  were convicted and sentenced to four years imprisonment for dealing in illegally refined AGO without licence and the truck in which they were arrested with, forfeited to the Federal Government and the AGO content destroyed”.

“In the same vein, Nnamdi Alifor is serving two years jail term while others charged alongside with him are still facing trial for illegally conveying large quantity of crude oil without license.

“This brings the total number of conviction secured to 25 this year alone,” the NSCDC boss added.