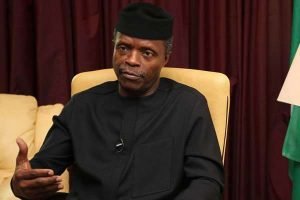 13 October 2017, Sweetcrude, Lagos – Vice President Yemi Osinbajo has denied the report claiming that he approved the $25 billion contracts by the Nigeria National Petroleum Corporation, NNPC, which is at the heart of the feud between Minister of State for Petroleum Resources, Dr. Ibe Kachikwu, and NNPC Group Managing Director, Dr. Maikanti Baru.

The Vice President has, however, denied approving any such contacts for the NNPC, saying what he approved was loans.

In a clarification of the Thursday information, Akande said in a statement that Osinbajo only approved two loans for the NNPC and not contracts.

Akande quoted the Vice President as making the clarification on Bonny Island, Rivers State, where he flagged off the construction of the N120 billion Bonny-Bodo Road.

The statement, titled “NNPC: AG. Presidential approval were for financing arrangements not contracts says VP Osinbajo”, read: “Approached by reporters after the ground-breaking multi-billion Naira historic Bonny-Bodo road project, in Bonny, Rivers State, Vice President Yemi Osinbajo, SAN, explained specifically that the approvals he granted to the NNPC while he was Acting President were for financing arrangements for the Joint Ventures between the corporation and IOCs, and not approvals for contracts.

“These were financing loans. Of course, you know what the Joint Ventures are, with the lOCs, like Chevron, that had to procure. In some cases, NNPC and their Joint Venture partners have to secure loans and they need authorisation to secure those loans while the President was away.

“The law actually provides for those authorisations. So I did grant two of them and those were presidential approvals, but they are specifically for financing joint ventures and they are loans not contracts”.