Senate blames both NNPC and oil marketers for the fuel crisis 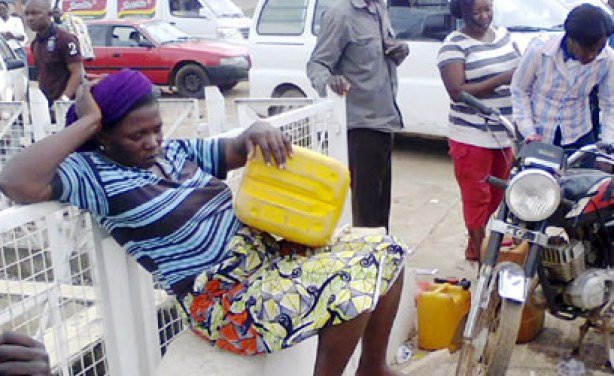 *A lady taking a quick nap while waiting to buy Kerosene at a petrol station.

The Committee Chairman, Senator Kabiru Marafa, stated this on Monday in Gusau while inspecting the fuel situation in the country.

Marafa, who was accompanied by a member of the committee, Sen. Abdullahi Danbaba, said the inspection was part of the assignment given to the committee by Senate President, Dr. Bukola Saraki.

“I have directed all members of this committee to go back to their constituencies to investigate the problem at the grassroots so that we take approximate measures to address the scarcity.

“We visited NNPC zonal depot Gusau to find out the quantity of fuel supply to the depot and we noticed short supply of the commodity.”

According to the Senator, “We are going to present our findings to the Senate. It is very disturbing to see the suffering faced by people due to fuel scarcity in the country.

“We question the NNPC over this issue because the Group Managing Director of the NNPC, Dr. Maikanti Baru, said they had doubled the quantity of daily supply of the product, but it is not available to the public.”

He added that “Another unfortunate thing is the attitude of our filling stations owners who sell this commodity to the public; they are involved in one or two malpractices.

“In fact out of the filling stations we visited, only two have complied with the government directives in this regard.”

The senator urged the DPR to sanction filling stations involved in hoarding and selling above approved government price of N145 per litre.

Meanwhile, a coalition of civil society groups under the aegis of Civil Society for Development Initiative, CSDI, have accused oil marketers of pushing for a return of the fuel subsidy regime.

CSDI, in a statement in Abuja, signed by its National Coordinator, Comrade Abolore Bakare, disclosed that to achieve their aims, the marketers had to create an artificial fuel crisis which plunged Nigerians into weeks of chaos and suffering.
‎
Bakare maintained that the fuel scarcity was artificial, adding that it was the handiwork of those running the oil and gas downstream to foist their exploitative interest on the NNPC through a return of the subsidy regime and price increase.

According to him, oil marketers have something up their sleeves and are trying to hoodwink the Buhari-led administration into reintroduction of the subsidy regime.

The group wondered how the oil marketers arrived at a proposed pump price of N171.05 which NNPC declined, and which led to clandestine activities, which led to their creating the fuel scarcity.

Bakare said, “We have it on good authority that oil marketers proposed an increase in the pump price of petrol to N171.05 per litre, which the NNPC declined. That was why they have decided to create artificial scarcity.

“It is glaring to all Nigerians that the downstream industry players have made up their minds to sabotage effort of government at all cost. That’s why they are hoarding fuel at filling stations across the country.

“We are appalled that when officials of NNPC including the Group Managing Director, Mr. Maikanti Baru; the Executive Secretary of the Petroleum Products Pricing Regulatory Agency (PPPRA), and Minister of State for Petroleum Resources embarked on a supervisory tour of filling stations, those saboteurs stuck to their guns.”

The group further accused the Independent Petroleum Marketers Association of Nigeria (IPMAN) and the Petroleum and Natural Gas Senior Staff Association of Nigeria (PENGASSAN) of complicity, particularly for declining the Senate Committee on oil and Gas (downstream’s) invitation, a situation, they described as antithetical to policies of government at ensuring that Nigerians enjoy the dividends of democracy.

Bakare urged the management of the NNPC not to acquiesce to the demand of the marketers, stating that the period of allowing few oil cabals hijack the destiny of Nigerians had passed.

The group commended the Senate Committee for taking steps towards curtailing the dangerous antics of the oil marketers, while it passed a vote of confidence on NNPC management.

It also urged Nigerians not to play the second fiddle for any reason since they were the direct victims of the hardship orchestrated by those who did not mean well for the nation.