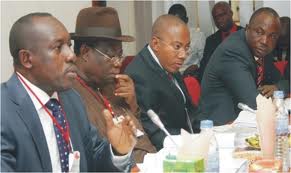 Some contractors of the Commission under the aegis of Oil Producing areas Contractors Association were the first to raise alarm on the issue when they paid a courtesy visit to the Managing Director of the Commission, Dr Chris Oboh.

In their separate comments, Chairman of the Oil Producing Areas Contractors Association, Elder Ernest Egbe and a member of the group, Mrs Gladys Amos drew the attention of the Managing Director to matters of missing job files and APGs. They enjoined him to take urgent steps to tackle the issue.

They also expressed dissatisfaction with delay in issuance of Interim Medium Payment Certificate, IPC by the new management of the Commission. While pledging their willingness to work with the new board to achieve its mandate of developing the region, they appealed to it to endeavour to address the problems raised.

Barely two weeks later another group, Niger Delta Contractors Association, NDCA said some jobs that were in the 2010 budget of the Commission had been removed.

Mr. Anderson Braide who spoke for the body at a media parley said contractors were surprised that the jobs which were in the 2010 budget did not make it in the 2011 budget. According to him, contractors had been mobilised for some of the jobs and had been on site.

He also expressed strong fears that the ugly development would lead to abandoned projects all over the region.

The contractors who called on President Goodluck Jonathan to intervene, said proper investigation should be conducted to find out how these jobs that had been approved and contained in the 2010 budget suddenly disappeared from the 2011 budget.

They said the ugly development was strange to the history of the commission, adding that past boards had continued with projects inherited from their successor. They also raised alarms that there were rumours of move to further remove more jobs in the 2012 budget.

The contractors said there are allegations that some members of the National Assembly and influential politicians were behind the development.

According to them, the rumour had it that some members of the National Assembly removed the jobs during vetting of the commission’s budget.

They called for presidential intervention, noting that they would not hesitate to organise themselves on a protest march to the presidential villa to compel the federal government to give the matter a serious attention.

“Majority of the projects which were duly awarded to contractors have either been removed from the next budget or cancelled out-rightly”.

“Right from the time of Timi Alaibe to Chibuzor Ugwoha, any job that was not executed the previous year, was carried over to the next budgetary year. At no time did any contractor lament the removal of his or her job from the budget”, Engineer Braid said

According to him, the previous board ensured jobs it inherited from past boards were paid for without any sentiment.

“Several jobs have been removed and nobody is telling us why it has to be so”.

The contractors further advised the new board of the Commission to be wary of politicians that may want to pressurise them against taking popular decisions and actions.

“Except those missing jobs are brought back to the budget, we will all march to Abuja in a peaceful protest to establish our grievances”, he noted

A similar statement from a group Watch Dog of Niger Delta/Niger Delta Peace Movement blamed the Managing Director of the Commission, Dr Oboh for removal of the jobs in the budgets. The statement signed by Sam Ebiye and John Walter further accused the MD of deliberate refusal to mobilise contractors to site for jobs that had been awarded. Like others, this group also urged the President and other stakeholders in the region to step into the matter with a view to resolving it.

“”We wish to call the attention of well meaning Niger Deltans and the President, Commander-in Chief of the Armed Forces of the Federal Republic of Nigeria, Dr Goodluck Ebele Jonathan … We write to inform that the activities of the Managing Director of NDDC alongside his cohorts is breeding tension in the Niger Delta region, to this end legitimate … likely to be used in defence of a peoples legitimate rights to economic survival, sustainability and development.

The crux of the pandemonium is that contractors who had passed through the process of bidding to tenders, selection, winning of contracts and signing of contract agreement with the Niger Delta Development Commission since last year have refused to be mobilized to site by the Managing Director of the Commission, Dr Chris Ogboh. The contractors’ payment schedules had gotten to the M.Ds office for signatory only for it to be halted because the Managing Director in collaboration with his allies had expunged the jobs from the 2011 budget and replaced them with jobs of their interest, thereby making the budget fraudulent.”

But who is really behind the removal of the projects from the budget? What is the reason for the action…? Some have blamed the Managing Director while another group think politicians should be held responsible. From all indications there is urgent need for the federal government to step in to resolve the problem before it cripples development in the region

When contacted for comments on allegations levied against him, the Managing Director of the Commission, Dr Oboh dismissed them as cheap blackmail. According to him, there was no way contracts could be awarded when budget had not been approved. The Managing Director who spoke through his Special Adviser on Media, Mr Honour Sirawoo said the new board would continue to stick to due process and act in the best interest of the region and the country at large.

“It was just last week the MD was invited to Abuja to collect a copy of the approved budget. When you present budget to the National Assembly you can’t say if it is what you gave that will be given back to you, there could be areas that could be touched. If anybody is talking about the MD hijacking this or expunging jobs it is not possible”

On allegations that he deliberately refused to make payment and mobilise contractors to site, the MD said he was going to adhere strictly to the budget, stressing that the books of the commission are open to scrutiny.