The Cars that cleans the air as you drive

06 January 2019, Sweetcrude, Lagos — Cars and trucks are one of the leading causes of air pollution—but cleaner vehicles such as hydrogen-powered cars clean the air as you drive.

Passenger vehicles are a major pollution contributor, producing significant amounts of nitrogen oxides, carbon monoxide, and other pollution Cars, trucks, and buses powered by fossil fuels are major contributors to air pollution—transportation emits more than half of nitrogen oxides in our air, and is a major source of global warming emissions in the US. Studies have linked pollutants from vehicle exhaust to adverse impacts on nearly every organ system in the body.

Cars, trucks, and buses produce air pollution throughout their life cycle, including pollution emitted during vehicle operation and fuel production. Additional emissions are associated with refining and distribution of fuels and to a lesser extent, manufacturing, and disposal of the vehicle.

Particulate matter (PM). One type of particulate matter is the soot seen in vehicle exhaust. Fine particles — less than one-tenth the diameter of a human hair — pose a serious threat to human health, as they can penetrate deep into the lungs. PM can be a primary pollutant or a secondary pollutant from hydrocarbons, nitrogen oxides, and sulfur dioxides. Diesel exhaust is a major contributor to PM pollution.

Volatile Organic Compounds (VOCs). These pollutants react with nitrogen oxides in the presence of sunlight to form ground-level ozone, the main ingredient in smog. Though beneficial in the upper atmosphere, at the ground level this gas irritates the respiratory system, causing coughing, choking, and reduced lung capacity.  VOCs emitted from cars, trucks, and buses — which include the toxic air pollutants benzene, acetaldehyde, and 1,3-butadiene — are linked to different types of cancer.

Nitrogen oxides (NOx). These pollutants form ground-level ozone and particulate matter (secondary). Also harmful as a primary pollutant, NOx can cause lung irritation and weaken the body’s defenses against respiratory infections such as pneumonia and influenza.

Carbon monoxide (CO). This odorless, colorless, and poisonous gas is formed by the combustion of fossil fuels such as gasoline and is emitted primarily from cars and trucks. When inhaled, CO blocks oxygen from the brain, heart, and other vital organs.

Sulfur dioxide (SO2). Power plants and motor vehicles create this pollutant by burning sulfur-containing fuels, especially diesel and coal. Sulfur dioxide can react in the atmosphere to form fine particles and, like other air pollutants, poses the largest health risk to young children and asthmatics.

The effects of air pollution

Pollutants from vehicle exhaust can affect more than just your lungs. Indeed, tailpipe pollutants pose health risks at every stage of life, and can even cause premature death. But the impacts of climate change, driven by global warming emissions, also affect people’s health and the well-being of entire communities. Global warming is leading to more frequent and intense heat waves—especially risky to children and elderly people—and to sea level rise, flooding, and drought that can devastate local communities.

Addressing heavy-duty vehicle pollution is critical for improving air quality and reducing global warming emissions in communities around the country. Continuing to lower emissions from fossil fuel–powered trucks is an important first step.

While this air pollution carries significant risks for human health and the environment, through the clean vehicle and fuel technologies, the effect can be significantly reduced with the use of fuel cells technology for cars and trucks while cutting projected oil significantly.

Clean vehicle and fuel technologies provide us with an affordable, available means of reducing transportation-related air pollution and climate change emissions. These include fuel-efficient vehicles that use less oil; cleaner fuels that produce fewer emissions; electric cars and trucks that can entirely remove tailpipe emissions and Fuel-Cell vehicles that have zero emission and at the same time clean the air.

Electric cars are helping to reduce pollution from passenger vehicles, with new technological developments, like electric trucks and buses, we have a unique opportunity to eliminate tailpipe pollution entirely, and increase the development of clean, renewable electricity and hydrogen.

A battery-electric bus on today’s electricity grid is the lowest-carbon option.  Electric motors are 3–4 times more efficient than gasoline/diesel engines; electric vehicles are still significantly cleaner. Many electric vehicle drivers actually have rooftop solar panels to cover their extra electricity use and the overall grid is getting greener practically every month as it shifts more and more to renewable energy and away from fossil fuels.

Fuel cell vehicles, powered by a chemical reaction between hydrogen and oxygen that generates electricity, emit no pollution or emissions of any kind—just pure water. While similar to battery-powered electric vehicles, FCVs are superior when it comes to several performance metrics. FCVs can travel 300-400 miles on a single tank and only need three to five minutes to refuel, which is comparable to conventional gasoline-powered vehicles. This allows drivers to enjoy the performance they’ve grown to expect from gasoline vehicles while substantially reducing their impact on the environment.

Hydrogen is an abundant constituent element in water, biomass, and fossil hydrocarbons. The greenhouse gas intensity (and other environmental impacts) of hydrogen production depends on the sources and processes through which the hydrogen is derived. It can be extracted from water using electrolysis, using power from renewable solar or wind, nuclear energy, or fossil energy. It can be extracted from renewable biomass or coal using high-temperature gasification. Or, using chemical catalysts, it can be derived from renewable biogas, renewable ethanol or methanol, or fossil natural gas. Hydrogen fuel cells are a clean, reliable, quiet, and efficient source of high-quality electric power. They use hydrogen as a fuel to drive an electrochemical process that produces electricity, with water and heat as the only by-products. The two main applications for hydrogen fuel cells are in stationary power sources and hydrogen fuel cell vehicles (FCVs). Today, most hydrogen is derived from fossil natural gas, emitting fossil carbon dioxide as a by-product.

HOW DO HYDROGEN FUEL CELLS WORK?

Hydrogen fuel cells create electricity to power a battery and motor by mixing hydrogen and oxygen in specially treated plates, which are combined to form the fuel cell stack. Oxygen is collected from the air through intakes, usually in the grille, and hydrogen is stored in aluminum-lined fuel tanks, which automatically seal in an accident to prevent leaks. These ingredients are fused, releasing usable electricity and water as byproducts and making the technology one of the quietest and most environmentally friendly available. 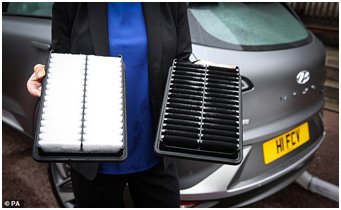 The vehicle’s air purification system filters 99.9 percent of very fine dust (PM2.5) and shows the exact amount of air purified on the display panel in the car each time you drive 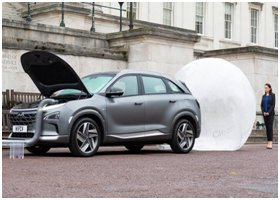 A hydrogen car manufacturers say the vehicle leaves the roads less polluted than it finds them and that introducing 10,000 of the cars would have the same effect as planting 60,000 trees.

Hyundai’s next-generation hydrogen electric car, the Nexo, has been driving along the most polluted streets in London – and purifying the air as it goes. Hyundai teamed up with University College London (UCL) to map a route of the most polluted roads in the capital, including streets in Elephant & Castle, Kings Cross, and Westminster. While the car itself only emits water and heat, it also has an air purification system that can filter 99.9 percent of fine dust and particulates in the air. Over the course of an hour, the Nexo can filter as much as 26.9 kilograms of air – enough, says Hyundai, to keep up to 42 adults breathing for an hour. If 10,000 of these cars were on the road, it would have a similar carbon reduction effect to planting 60,000 trees.

Researchers from University College London (UCL) began by pumping dirty pollutants from a balloon into the vehicle. The amount of air which passed through the car was equivalent to the total amount of air a typical adult would breathe over 100 years. The dirty particles were then filtered out through the car’s filtration system – which removed 99.9 percent of the pollutants – and emitted into the second balloon.

The vehicle’s air purification system filters very fine dust and reveals the exact amount of air purified on the display panel in the car each time you drive.

Research into fuel cell technology has found it to be a promising transport solution to consider as an alternative to fossil fuel dependent cars and battery electric vehicles which have long charging times.

It is undisputed that mobility will change greatly in the coming years. Alternative drive technologies are becoming increasingly competitive and are in some cases already a real option today. According to current studies, no single technology will replace the traditional combustion engine. Instead, it is expected that a variety of concepts will co-exist. The fuel cell is one of these. By 2050, there could be more than 100 million hydrogen-powered vehicles on the roads. This technology is particularly strong when it comes to long distances. The ranges of fuel cell vehicles are significantly greater than those of comparable electric cars. With sustainable production of hydrogen, fuel cell vehicles operate without emissions and contribute to improved air quality.