APAC jack-up utilization to ramp up to 95% this year

Newswire — Rig activity in the Asia Pacific region, which comprises Southeast Asia and Australia, has become much busier in 2022. In Southeast Asia, however, all that activity is not completely due to increasing rig demand from operators.

From March 2022, shortly after the Russian invasion of Ukraine, the number of committed jack-ups ramped up. Marketed utilization is now near 90 percent and as it stands, Westwood energy claimed, further improving utilization could be expected, potentially hitting 95 percent by the end of the year. 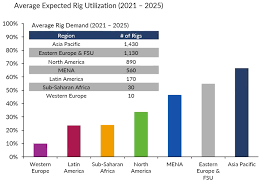 Floating Rigs
In Southeast Asia, there are only three active drillships, two of which are working, with Transocean’s Dhirubhai Deepwater KG2 being the lone stacked unit. However, the rig could be departing the area for a contract elsewhere soon.

According to the Westwood Global Energy Group, dayrates for new drillship fixtures this year have been in the $220,000 range, but it is understood that upcoming rates are likely to be closer to $270,000, not including managed pressure drilling (MPD) services, a premium that can add $50,000 or more to the rate.

There are presently 12 semi-submersibles in the APAC region. Seven in Southeast Asia and five of those are marketed. Four of the five units are working, but only two have contracts that extend beyond 2022. As for dayrates, only three new semi-sub contracts have been signed this year, with dayrates still below $200,000.

In Southeast Asia, data shows 16 rig requirements in the rig inquiry stage, but only six of the 16 will last more than 100 days. These numbers ensure no rig supply growth and could even drive a rig or two out of the region.

Westwood added that all five semi-subs offshore Australia are currently working and while one of those will go idle in July, three of the five are spoken for into 2024. Of the three new semi contracts signed in 2022, the most recent fixture hit $379,000, well above the previous high of $265,000.

As for rig requirements in Australia needing a floating rig, there are currently over 17, with seven of those lasting over 100 days. With five semi-subs in the area, some of those will have to try and string together short-term contracts with some idle time expected should all five remain there.

Jack-ups
The APAC jack-up market on the surface may not seem as exciting as it should be given where oil prices are, but marketed utilization in 2022 has improved by 12 percent and now stands at 90 percent.

However, Westwood believes that the number is a bit misleading and warrants a closer look since 45 marketed rigs in Southeast Asia that are contracted or committed, six are destined for Saudi Arabia. In addition to those six, there are another four newbuilds that are also slated to move there. By the end of 2022 or early 2023, 15 jack-ups will have departed Southeast Asia for contracts with Saudi Aramco.

As for dayrates, a recent contract award for Borr Drilling’s Saga got the attention of the market with a four-year deal at a rate reportedly just below $105,000.

More recently, Valaris announced a four-year contract for the Valaris 115 with the same operator in the same rate range. However, dayrates for recent shorter-term contract awards have been wide-ranging, from as low as $67,000 to as high as $90,000. In Australia, 2022 fixtures have seen rates in a much tighter range of $112,000-$118,000, the higher number just recently being fixed.

The APAC region currently has over 40 programs in some stage of rig inquiry, including 13 in Australia alone, quite a number given that there are only two jack-ups in the country. In Southeast Asia, the largest number of jack-up requirements are in Malaysia, followed by Indonesia and Vietnam.

“The need for a Safety Case and high operating expenses and unions makes Australia a very difficult market to penetrate. The Noble Tom Prosser and Valaris 107 are the two primary rigs operating here, while the Valaris 249 recently began work offshore New Zealand. It is understood that the rigs may try to enter the Australia market in February 2023 when that contract ends,” Westwood claimed.

Tender-Assist Rigs
According to the company, Southeast Asia is now the lone region in the world where tender-assist barge-type rigs operate. There are currently 14 of these rigs in the region.

Nine of the 12 are working or committed for work, providing 75 percent utilization. Much of the work with these rigs is carried out offshore Thailand for state oil company PTTEP, which will employ eight of the nine committed units. The contracts are a mixture of long-term (three years) and shorter-term (five months) contracts driven by Thailand’s need to boost gas production.

One unit currently in China will be going to Myanmar at the end of the year, and there are rumors that one more may enter the APAC market from West Africa. Westwood believes that there still is a potential for utilization to surpass the 90 percent threshold later this year.

“Little data is available regarding dayrates, but sources suggest fixtures are likely in the $50,000-$65,000 range. However, overall rates in the tender market for existing contracts range from as low as $48,000 to as high as $75,000,” Westwood explained.

Rising inflation is also having a direct impact on operating costs. Increased travel fares will only accelerate the use of local crews and supplies where possible. As a result, rig owners are seeking adjustments to dayrates, but so far, we have yet to hear if any have been successful.

The increase in hiring and using local crews could present a good opportunity for training to come to the forefront to address this in the long term.