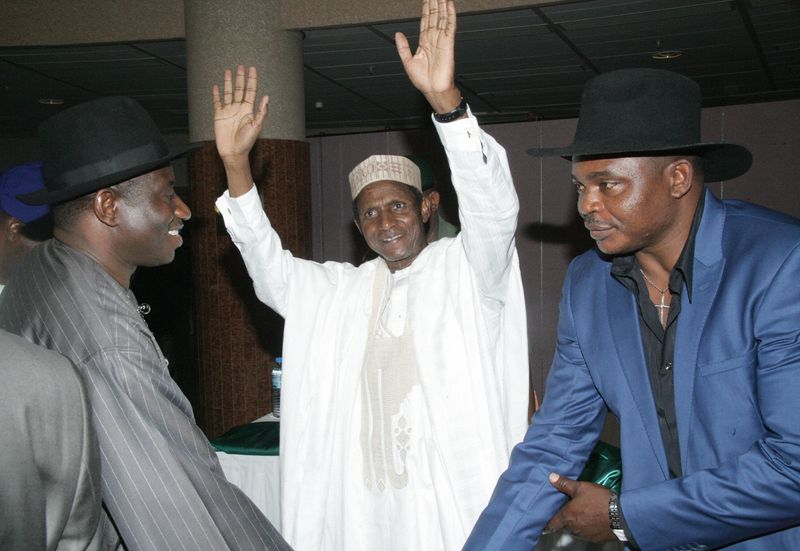 *Umaru Yar’Adua, center, and Boyloaf during an amnesty meeting in 2009 in Abuja. Photographer: Emmanuel Wole/AFP via Getty Images.

Abuja — Ebikabowei Victor Ben sips French red wine at his plush home in Nigeria’s capital as he reminisces about a daring speedboat attack on one of the nation’s most critical oil installations.

The raid in June 2008 targeted Royal Dutch Shell Plc’s Bonga production vessel 120 kilometers (75 miles) off the nation’s coast, escalating a three-year insurgency by showing oil companies they could be targeted anywhere, on and offshore. Ben’s success pressed the government to accelerate an amnesty program aimed at encouraging fighters to lay down their weapons.

Better known as General Boyloaf, Ben, 47, is one of half a dozen rebel commanders who in 2009 disarmed in return for monthly government stipends and vocational training. He now owns Bensam Maritime Oil & Gas Ltd., which does subcontracting work for Shell and Chevron Corp. — the very companies he once tried to hound out of Nigeria.

“I prefer the life of a businessman,” Ben, who is completing a degree in international relations, said in an interview at his compound in Abuja.

The amnesty has largely brought peace to the Niger River delta, the main source of Nigeria’s crude, by providing opportunities in business and politics to militant commanders like Boyloaf, and cash to their former troops. A recent threat by some former militants to return to hostilities provides a reminder of how critical stability is in the region, as the government looks to increase oil revenue to plug persistent budget shortfalls and revive faltering growth in one of Africa’s biggest economies.

‘Cheapest Option’
Ben was a leader of the Movement for the Emancipation of the Niger Delta, or MEND, a loose coalition of militias whose fight for greater local control over the region’s oil wealth wreaked havoc on the economy. With violence and kidnappings that intensified from the mid-2000s slashing average daily output by 40% to 1.6 million barrels, then-President Umaru Yar’Adua cut a deal with the campaign’s leaders.

The enrollment of about 30,000 MEND fighters into the amnesty program, each of whom receives 65,000 naira ($179) a month, ushered in a period of relative calm that ensured crude was flowing again. The annual budget for the program is currently about 65 billion naira.

While leaders like Ben don’t appear to benefit more than their foot soldiers from the amnesty program, they profited handsomely from government deals to protect pipelines they previously sought to blow up, said Tarila Marclint Ebiede, a research fellow at the Centre for Research on Peace and Development at Belgium’s Catholic University of Leuven.

“Oil majors awarded contracts to ex-militant leaders as a way of keeping the peace,” he said. Spokesmen for Shell and Chevron didn’t respond to requests for comment.

Human Catastrophe
The cost of the program is dwarfed by the human and financial catastrophe of MEND’s peak years. Fifty attacks on oil installations and rampant crude theft resulted in the state and oil companies losing at least $23.7 billion in 2008, according to a government report.

At least 1,000 people were killed and 300 others were taken hostage over the same period, it said, while a brutal military response proved unable to crush the insurgency.

“When you compare it to the cost of addressing the developmental challenges in the Niger Delta, 65 billion naira is cheap,” Ebiede said. Still, the factors that caused the unrest – including corruption, poverty and pollution – haven’t been adequately tackled and many former militants are yet to find alternative employment, he said. “The drivers of conflict are still there and, if anything, they have intensified,” according to Ebiede.

After President Muhammadu Buhari won elections in 2015 that ousted the former ruling party, his government ordered large cuts to the amnesty project, ended pipeline-surveillance contracts and announced plans to terminate the program. Within months, a new militant group emerged under the banner of the Niger Delta Avengers. Attacks on oil facilities resumed, slashing Nigeria’s output by as much as a half and helping plunge the country into its first recession in a quarter century.

Negotiations through community leaders, who reached out to fighters, ended the violence as amnesty funding was restored and payments resumed.

Ben endorsed Buhari before his re-election last year and thinks the president is a “man of principle” committed to maintaining the flow of crude.

“Peace is very hard to come by and it’s very expensive,” Ben said. “Anyone who wants to close the program will have to face the repercussions.”