Oil falls from 2015 highs as rally runs out of steam 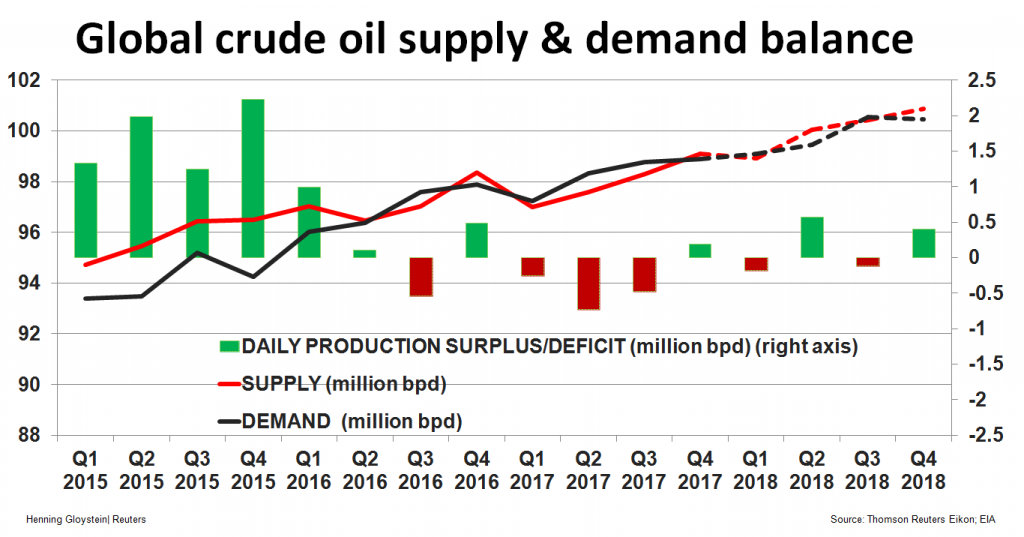 27 December 2017, Calgary, Alberta — Oil prices dipped on Wednesday after hitting a near two-and-a-half year high in the previous session as a rally fueled by supply outages in Libya and the North Sea ran out of momentum.

U.S. West Texas Intermediate (WTI) crude futures were at $59.66 a barrel, down 30 cents from their last settlement. WTI broke through $60 a barrel for the first time since June 2015 in the previous session.

“The market continues to gravitate towards bullish news but today we are seeing a little bit of profit-taking,” said Gene McGillian, manager of market research at Tradition Energy in Stamford, Connecticut.

On Tuesday, Libya lost around 90,000 barrels per day (bpd) of crude oil supplies from a blast on a pipeline feeding Es Sider port.

Repair of the pipeline could take about one week but will not have a major impact on exports, the head of Libyan state oil firm NOC told Reuters on Wednesday.

The Libyan outage added to supply disruptions of recent weeks, which also included the closure of Britain’s largest Forties pipeline.

On Wednesday, Forties was pumping at half its normal capacity and its operator was pledging to resume full flows in early January.

The Forties and Libyan outages, which together amount to around 500,000 bpd, are relatively small in a global context of both production and demand approaching 100 million bpd.

“While supply impact is immaterial, it shows that with the market structurally undersupplied and inventories continuing to draw, geopolitical risk has now re-emerged as an important factor in day-to-day trading dynamics,” analysts at Tudor Pickering Holt Energy Research said in a note.

Oil markets have tightened significantly over the past year thanks to voluntary supply restraint led by the Middle East-dominated Organization of the Petroleum Exporting Countries (OPEC) and non-OPEC Russia.

Data from the U.S. Energy Information Administration (EIA) shows that global oil markets gradually came into balance by 2016 and started to show a slight supply deficit this year following rampant oversupply in 2015. The data implied a shortfall of 180,000 bpd for the first quarter of 2018.

A major factor countering OPEC and Russia efforts to prop up prices is U.S. oil production, which has soared more than 16 percent since mid-2016 and is fast approaching 10 million bpd.

The latest U.S. production figures are due to be published by the EIA on Thursday.