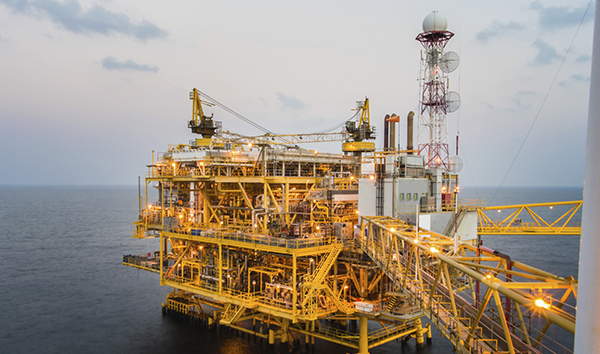 03 January 2018, London — Oil prices hit mid-2015 highs in early trading on Tuesday but dipped to settle slightly lower as major pipelines in Libya and the UK restarted and U.S production soared to the highest level in more than four decades.

It was the first time since January 2014 that the two crude oil benchmarks opened a year above $60 per barrel. Prices were buoyed by large anti-government rallies in Iran and supply cuts led by OPEC and Russia.

The spread between U.S. crude and Brent WTCLc1-LCoc1 hit the narrowest in nearly two weeks.

The 450,000 barrel per day (bpd) capacity Forties pipeline system in the North Sea returned to full operations on Dec. 30 after an unplanned shutdown.

Repairs have been completed on a Libyan oil pipeline damaged in a suspected attack last week and production is restarting gradually, engineers said.

“The resolution of the North Sea pipeline issue is having the expected result that the Brent-WTI spread is narrowing today,” David Thompson, executive vice-president at Powerhouse, an energy-specialized commodities broker in Washington.

Thompson added that traders have been returning to work from the holidays, boosting volumes.

“Despite the day’s price weakness, both Brent and WTI remain in solid, long-term bullish trends – $58.95 is nearby support on WTI front-month futures and $65.60 is the corresponding support on front-month Brent futures.”

Iran’s Supreme Leader on Tuesday accused the country’s enemies of stirring unrest, as the death toll rose to 21 from anti-government demonstrations that began last week.[nL8N1OX0XY]

Iran is OPEC’s third-largest crude producer. Iranian oil industry and shipping sources said protests have had no impact so far on oil production or exports.

“Geopolitical risks are clearly back on the crude oil agenda after having been absent almost entirely since the oil market ran into a surplus in the second half of 2014,” Bjarne Schieldrop, chief commodities analyst at SEB, said, also citing Kurdistan and Libya.

Oil prices have been supported by production cuts led by the Organization of the Petroleum Exporting Countries and Russia. The cuts are scheduled to cover all of 2018.

However, rising U.S. production, which is on the verge of breaking through 10 million bpd, has tempered the bullish outlook.

October U.S crude production rose 167,000 barrels per day to 9.64 million bpd, according to the EIA’s monthly production report. If the figure is not revised next month, it would be the highest monthly level since May 1971.