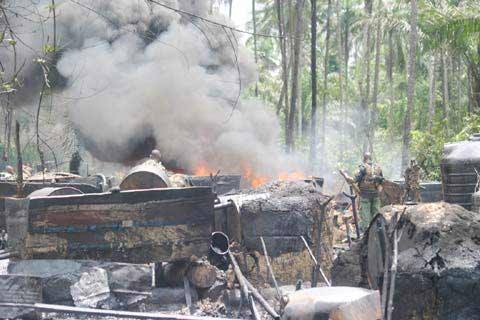 26 December 2017, Sweetcrude, Port Harcourt — In its drive to rid the Niger Delta region of oil theft, pipeline vandalism and other sundry vices, the Nigerian Security and Civil Defence Corps, NSCDC, says it has destroyed a total of 156 illegal oil refineries in Rivers State between January and December 2017.

NSCDC Commandant in the state, Mohammed Haruna, announced that Corps operatives also arrested a total of 145 suspects for various offences in the year under review.

He disclosed that the Command also secured 25 convictions, explaining that 48 suspects were already serving jail terms while others are awaiting trial.

“Illegal refineries that we have destroyed since I came on board in January is not less than 156.

“One very dangerous trend now is that these illegal refineries are now producing AGO, DPK and PMS.

“Within the year under review, that is from January until today we have impounded 69 trucks, 21 cars, and buses.

The State NSCDC Boss also disclosed that the Command has trained 162 guards for private companies, and also sealed off four private security guard companies for operating without a license.

He added that its recently established Peace and Conflict Resolution Department has successfully resolved 68 marital, lands and Chieftaincy issues in the state, this year.