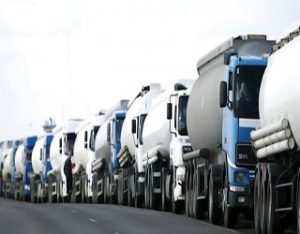 19 January 2017, Sweetcrude, Abuja – Petroleum Tanker Drivers (PTD), the association representing all drivers of petroleum trucks in the country, has threatened a nationwide boycott of bad roads should the Federal Government fail to rehabilitate major roads before the rains begin.

The PTD National Chairman, Comrade Salimon Oladiti, who made the threat in a statement signed by Mr. Abdulkadir Garba, Head Media Relations of the union, in Abuja, said the planned boycott would affect the smooth supply and distribution of petroleum products to some parts of the country.

He noted that “Despite the visit by the Vice President, Prof. Yemi Osinbajo, the road leading to the Tatabu Bridge is still in a deplorable state stretching from Jebba to Mokwa, where trucks spend days on the road.

“We, therefore, call on the Federal Government to expedite action on repairing the road, because with the onset of the rain soon, the situation will totally be out of control.”

According to him, “Some of the bad roads identified must be repaired as Tanker Drivers cannot do anything to assuage the suffering of Nigerians under the circumstance. Already, some roads are by-passed to Mosimi to demonstrate that PTD is ready to work 24 hours to ensure smooth supply of products across the country.

“However, unless something is done to stem the tide of tankers breaking down or upturned, the situation will be difficult and the union will be left with no choice than to boycott some of the bad roads.”

“The system now bridges fuel products to the North and other parts of the country through Ibadan-Mosimi and Ejigbo depots as well as Warri-Calabar-Aba depots, while waiting for the commencement of Ilorin-Ore depots among others.

“We support the use of other depots outside Lagos as a way of de-congesting the gridlock in Apapa and easing the problem of fuel scarcity and that where this method, as well as the system Two-B, is sustained.

“The perennial problem of fuel scarcity will soon be a thing of the past,” Oladiti said.