Cairo — Egypt’s annual urban consumer inflation slowed to 13.2% year-on-year in June from 13.5% in May, data from the state statistics agency CAPMAS showed on Thursday.

Month on month, headline inflation eased 0.1%, compared to a 1.1% increase in May. 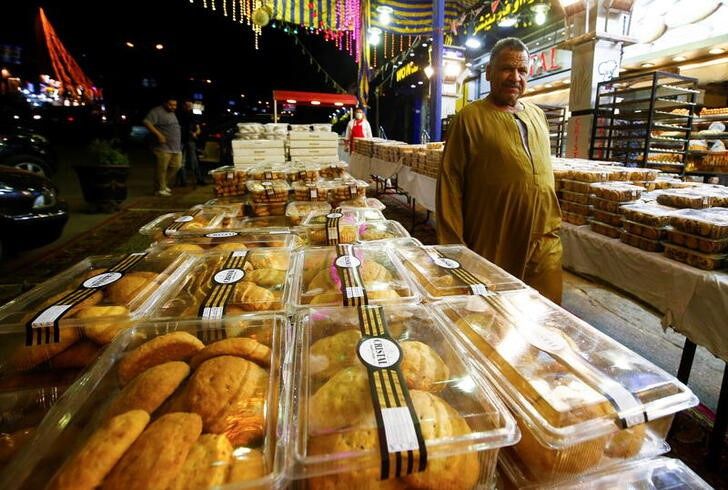 *An Egyptian costumer looks at traditional sweet cookies “Kahk” and biscuits, as part of the celebrations of Eid al-Fitr festival, at a bakery in Cairo, Egypt April 29, 2022. REUTERS/Amr Abdallah Dalsh/File Photo

The sharpest annual price increases were in the food and drink, recreation, and restaurant and hotel sectors, according to CAPMAS.

The central bank on Thursday said core inflation, which excludes volatile items such as food, rose to 14.6% year on year in June from 13.3% in May.

Egypt has been hit by the knock-on effect of global commodity price rises that accelerated with Russia’s invasion of Ukraine, though the government has absorbed some of that impact.

“Prices are somewhat stable globally as oil prices saw a fall recently,” said Noaman Khalid, an economist at Arqaam Capital. “Also, there were no commodity price hike decisions from the Egyptian government.”

Inflation trends in coming months would depend on whether Egypt would need to allow commodity prices to rise under the terms of an expected deal with the International Monetary Fund (IMF), he said.

Egypt’s Central Bank targets an inflation rate between 5% and 9%, but said when it raised interest rates by 200 basis points in May that it would temporarily tolerate inflation above that level. read more

The committee kept rates unchanged in June and its next meeting is scheduled for Aug. 18.